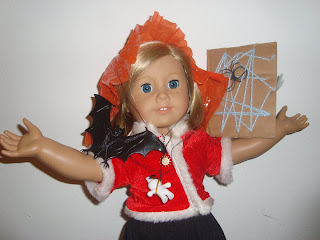 Hi, It's Nikki. All of us dolls are soooooooo excited about Halloween coming up! We're all trying to decide what we want to be. Molly's going to be a movie star, and I'm going to be a pony. Kirsten's going to be an astronaut, and Samantha's going to be a television. Angela decided to be a banana! But we were all shocked when Kit announced her costume. She is going to be Santa Claus! How crazy! Why, of all the costumes in the world does she decide on being a Christmas guy. Well that's what we all told her. And I admit we all might have been a little rough on her, because then she burst into her room sobbing, "Nobody likes my costume." A couple minutes later, Kit came out with a smile on her face. "You guys gave me an idea!" she said. My costume is going to be a Halloween Disaster! She was wearing the santa top, and a ghost hat. Kit had a fake bat and a spiderweb clipped to her shoulder. We all chuckled. It was a good, and original costume. Kit really is a Halloween disaster. We all can't wait until Halloween!
Posted by AG Gossip Doll Blog at 5:18 PM