a Fun Fourth of July! (By Angela)

Yesterday was such a fun day! When we woke up, we played our annual soccer match. Team stars against team stripes. Kit accidentally kicked the ball in the wrong goal twice so, team stars won. Next, we put on a parade that was probably the worst parade in the world, but we all had fun. In the first row, were all three chefs singing a cheesy song that went like this: 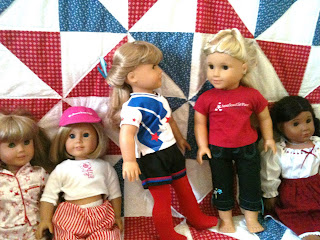 To make it worse, they were all holding star spangled spatulas! Next in line, was Marisol and I doing a really cheesy baton twirling act. Then came Felicity riding a fake horse waving a flag. (By the way she was dressed like  Martha Washington) Then came Jessica and Chrissa wearing an american flag bathing suit with floaties on her arms, singing the national anthem. They made a big speech about some boring swimmer being a star american. Then came Kit. No exclamation necessary. Then came Kirsten trying to fly a kite, but there was no wind that day, and you can imagine how things went. Next was Julie. She was wearing a bunch of shiny flashy "bling-bling" bracelets. After that came Josefina dressed as an immigrant walking into the americas. She sang "grand old flag" in a very thick accent, and (it sounded horrible!) Nikki dressed as a traditional american cowgirl, except one flaw: She was riding an electronic bull! Rebecca tried to put on a small scene except there was ten people in it, and she had to play all ten. At the end, everyone attempted to sing america the beautiful, only we couldn't get the harmonies right. If you thought that sounded kinda bad, think again. Everyone in our neighborhood sat out on lawn chairs waiting for us to come by with our famous annual parade. After that, it was starting to get dark. We took a group photo and headed out for the fireworks show! Yesterday was fun!
Posted by AG Gossip Doll Blog at 12:03 PM