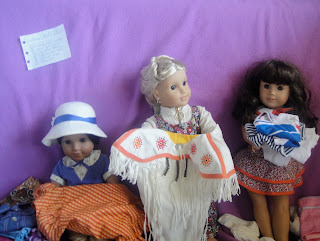 Today was the day, it came the moment we've been dreading. Summer cleaning! My friends and I - Josefina and Julie went to the laundry room to start the cleaning. The first thing on the list was the laundry. We noticed at first that we hadn't done the laundry in so long, that it was piling overboard into six laundry baskets, and just to make things worse, none of it had been folded. Though cleaning is a stinky job, Julie seemed to thinked that it was the most amusing thing. She would never have thought this had it been for Kaya's Pow Wow dress she wore to her aunt's wedding. Julie had fun playing dress up with us. But before they knew it, Kaya had stomped in and took the dress away. Samantha kept dropping piles of clothing and soon the floor was filled with hankerchiefs and tights. After we had finished the laundry by about midday, we of course had to move on to the next thing on the list, clean out the closet. We found everything from old boomerangs to one of Kit's old dipers. Speaking of Kit, while cleaning the closet, we ran into some mysterious fake bugs which "somebody" must have put there. That took us about 2 hours, and then it was time to organize the coat closet, which seemed like an easy job had it not been all those heavy winter parkas falling down on us and making the job harder and hot. I mean who would want to think about winter right now? The next one on the list we held out till very last,on purpose. None of wanted to clean the garage right now..... But the job had to be done. Besides all the roaches and cobwebs the job went well . Not that you would count the big fake tarrantula Kit had placed!  Well we still had time for an afternoon snack before we a nap being so tired about all the work that had been done today.
Posted by AG Gossip Doll Blog at 10:00 AM