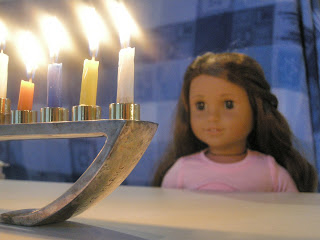 Yesterday was the last night of Hanukkah! We had a blast celebrating the eight day festival of lights. Rebecca organized all of the festivities. On the first night of Hanukkah, we each got a beautifully wrapped gift. When we opened them we each found a Menorah, which is a candle holder that holds eight candles plus one extra called the Shamus. We also got colorful candles to light! Carely put her cooking skills to use by making golden, crispy latkes (potato pancakes)! Yummy! One night, Julie put a huge glob of sour cream on her latkes. When she took a bite, she quickly spit it into a napkin. "That wasn't whipped cream!" she exclaimed. We also had a ton of dreidel games during the course of the holiday. So many that we ran out of gelt (chocolate coins)! I admit, it's hard not to snack on your gelt during the game! It's a good thing we found a bag of peanuts in Kit's messy room! My favorite part of Hanukkah has always been lighting the Menorah. This year we tried to help Molly get over her fear of burning herself with the candles. She still worries about dropping a candle and setting the house on fire, but she has improved! There is something really beautiful about 15 Menorahs all lit. Yesterday, I stared in awe at the sight of 135 flames dancing joyously together. Happy Hanukkah!
Posted by AG Gossip Doll Blog at 8:20 PM