We All Scream For Ice Cream! (by Nicki) 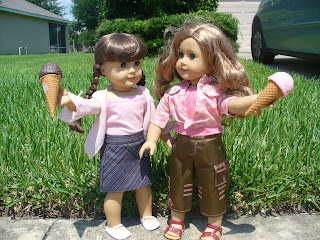 Hello everyone, its Nicki! I hope everyone is having a great summer I know us AG Gossip dolls are. No school, lots of sun, and lots of fun! This morning Angela announced that it was going to be 99 degrees outside. Yikes! All morning most of us were lounging around with fans because it was so hot. All of a sudden Kit, Chrissa, and Julie burst into the living room and started squirting us with water guns. "Ahh! That's cold!" shreiked Josefina. Kit laughed, "That's the whole point!" Soon everyone, including Josefina, was running around the backyard shooting each other with water guns and having a good time. After a while, we were all exhausted! We plopped down in the grass while Kit told us knock-knock jokes. "Purple zebras are knocking at your door because you ate their pickles! Ha ha ha ha ha!" said Kit laughing at her own joke. But a faint sound could be heard over Kit's giggles. A tinkling music box sound could only mean one thing...THE ICE CREAM TRUCK!!! We all scrabbled to get up and sprinted toward the sound of the music. The music got louder and louder until we could see the end of the truck go around the corner! We dashed after it untill..BARK! BARK! BARK! Mr. Nelson's big Rottweiler, Chomper, came sprinting towards us. And let me tell you, Mr. Nelson has one big, mean dog! We all ran away screaming as fast as we could. Finally, Chomper spotted a squirrel and bolted off in the other direction. Whew! We could finally stop to catch our breath. Then we heard the truck again, and off we went! Eventually, we caught up with the truck and ran up to it. Just as Jessica was about to order, a lady in a suit, holding briefcase walked in front of her. "Hello ladies. I'm Martha Jones. You girls look like you could use some foot cream." said the lady. "Foot cream?" said Jessica. "Yes, foot cream! Have I got the foot cream for you! I've got cream for big feet, small feet, dry feet, wrinkled feet, smelly feet, sore feet, itchy feet! I've got scented foot cream, anti-dandruff foot cream, even foot cream that solves world hunger!" Jessica tried to explain to her that our feet were perfectly fine but the lady wouldn't listen. By the time we finally convinced her that Mr. Nelson really wanted foot cream for his dog, the ice cream truck was gone. But once more, we could still hear it! So we all ran as fast as we could! And at last, we found the ice cream truck. Jessica walked up and said "Can I please get one...Ahh!" Sprinklers had turned on, soaking us all! We dashed out of the water to a dry spot. Luckily the ice cream man pulled his truck up to us. We could finally get our ice cream! "Can I please get one Rainbow Ice Cream Pop?" asked Jessica. "I'm sorry, kid." said the ice cream man, "I'm sold out. The only thing I have left is some Brussel Sprout Broccoli Blizzard Bars. How about that?" "NO THANK YOU!" we said. Yuck! We all trudged home,wet and icecreamless. When we got home, Caroly was in the kitchen. "Hey guys! Where have you been all day? The homemade ice cream I was making is finished! Want some?" We all scrambled over. She had made strawberry, chocolate, and vanilla ice cream! And even bought sugar cones! I had the strawberry, and it was the most delicious ice cream ever! There is nothing like cold ice cream on a hot summer day. Yum!