Our first day at camp! (By Kaya)

After the bus picked us up, it stopped so we could all load our suitcase and belongings into the cargo section on the side of the bus. Then, we got in and found seats among the screaming pile of other girls we didn't know. This was quite the new experience for all of us, and we were all nervous and excited about sleep away camp. The bus ride went along like this. Kit spent a few hours getting her fingers stuck in a Chinese finger trap, (and then trying to get out of it) "Sergeant" Samantha decided to write the post you saw yesterday about our hectic morning, Jessica listened to her favorite singer on her iPod, and Carely tried small talk with the girl sitting next to her. They seemed to be getting along fine. Molly was reading a book, and Nikki was watching the cheesy movie they were showing on the bus TVs (Well before it made her fall asleep) All I wanted to do was take a nap. The rest of us were simply focused on trying to avoid Josefina, who had gotten a little too carsick! While we weren't doing that, we passed time with good ole rock, paper, scissors, shoot! and thumb wars.

Soon we pulled up at camp, and everyone on the bus stopped what they were doing (even Josefina) to cheer for the sign that welcomed us to Camp PineLake! I turned around, and there were at least five other busses behind ours complete with more screaming girls. My nerves came back a bit when I wondered how far all these people had come to get here. The bus stopped, and a Woman in an official outfit walked onto the bus and introduced herself as Cassi Kirk. She looked around twenty five, and had a vibrant smile, and vivacious energy. She welcomed us with "Three Cheers for PineLake" and then told us that she was one of the camp councilors who would be overseeing the events. There would also be one councilor in each cabin to guide each group of girls.

Soon, all six busses unloaded quickly! We all carried our bags with us and followed the signs to a big, grassy field overlooking a lake, the main buildings, some cabins, and of course, pine trees! There was a wooden platform with a microphone on it in front of where we were sitting. A woman in her late 40s walked up to the podium, and introduced herself as Barbara Kirk. She gave us all a warm welcome to camp, and told us all the specifics, like when we were having meals, information about the camp, and the general rules and expectations. Barbara said that a woman named Marger Pittz would come in to everyone's cabin unannounced sometime during the week that we were here to make sure that we kept the room tidy. Then we got divided into cabins. The counselor for each cabin would call out the names of about 16 girls and they would follow her to their cabin. I started to get worried then. What if I got put in a different cabin than all of my friends and I didn't know anybody! Not to worry, though because after about 5 cabins being called, Cassi Kirk called my name amongst all the other girls. I was relieved! But after knowing this, I still hoped I'd be able to meet someone new while I was here. 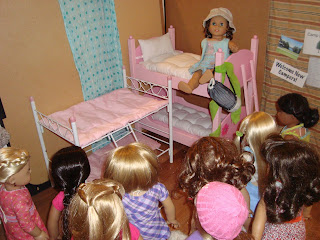 Cassi pointed out our cabin, then said she would be back later to check on us, but she had office work to do now. We all waved goodbye then walked in. We looked around our cabin, and there were three rooms with a common room in the middle. The cabin was tiny, but very cozy. Then, we all noticed that there was another girl here besides us, and she was already settled in to the top bunk! She saw that we were looking at her, so she introduced herself. "Hi, I'm Marie-Grace!" We all felt a bit embarrassed because we still hadn't talked to her yet. Kit broke the silence with a blaring, "Hi, I'm Kit!!!" The rest of us followed and soon we were laughing. Marie-Grace explained that she had went to Camp Pine-Lake every year, and this was her fourth time. She told us all about the bathrooms, and the yucky food. Her favorite part, she said was swimming in the lake, and then we all said that sounds like fun! We rushed into our bathing suits and jumped right into the glistening lake, laughing all the way. We would have swam forever, but then Cassi called us inside to dry off, before the whistle called us into the dining hall. 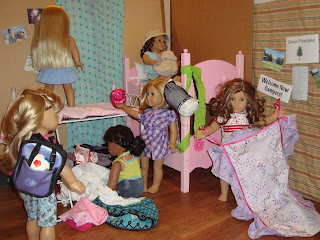 Cassi told us that we wouldn't want to miss dinner tonight, because it was Frankfurters and beans. After dinner, we all agreed with Marie-Grace that the food definitely was how she said it was, not good! We ended up telling her all about how much we missed Carely's delicious home cooked mashed potatoes (which, by the way you can see in the Cooking with Carely tab on the blog!) Soon we were telling her everything, and it was clear that she was turning into a great friend. Then Cassi walked in, and told us about the two whistle call - pajama time, and the dreaded three whistle call - you better turn the light out! She told us that we should probably unpack and get our beds ready. It was way harder then it sounded! While most of us struggled to pack everything out of our tiny suitcase, and straighten up our blankets and sleeping bags, Marie-Grace (who had already unpacked) sat cuddling Coconut. (Did we mention that we brought the dog?) It was dark and cold outside, but it sure was cozy inside our cabin. Marie-Grace felt like our best friend by now as we laughed and told ghost stories in the moonlight. Camp was going great. When the three whistles sounded, we blew out our candle, and went to our own little rooms, and yes, we fell asleep! 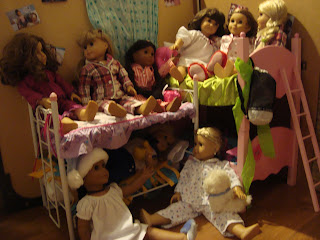 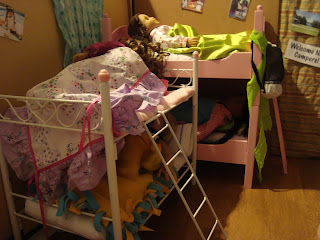