All Bundled Up (by Molly) 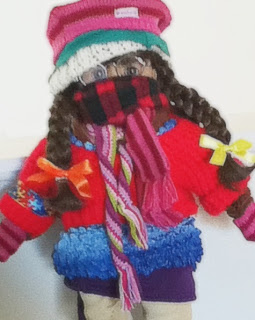 Hello, everyone! It's Molly! January is sadly coming to an end. That means the deadline for our hair styling contest is almost here! You still have a short amount of time to submit your entries. Remember to send us a picture of your doll wearing an original hair style by February 1st for a chance to have your style in the Snazz Salon! Brrr...it is surely cold outside. On Friday, we had a snow day and school was cancelled! We have spent the weekend playing in the abundant snow. I love the snow, making snow angels is my favorite! The only thing I don't like is having to put on so many layers, it is so annoying! Today was a beautiful day. There was a brilliant blue sky and white powdery snow, perfect for snow angels!  I felt motivated enough to slip on a turtleneck, a pair of snow pants, and a sweatshirt. I rushed out of my room excitedly and headed for the door. Before I could reach the door, Josephina stopped me. "Molly! You can't go outside like that, it's freezing out there. You need to put on something warmer!" She stepped in front of the door to guard me from getting out. Obviously, I was going to have to do what she said. I ran to my room and put on a light jacket, a scarf, hat, and a pair of mittens. Feeling a bit warm, I started to go outside again. Nicki and Carely were just starting to build a snowman! Then I heard a voice from behind me, "Where do you think you're going???" It was Josephina, of course. "I don't want you to catch a cold. You'll freeze out there!" said Josephina. I sighed, and again went back to my room. I put on a long-sleeved shirt, a sweater, and got another scarf for good measure. When I opened my bedroom door, I was startled because Josephina was standing there with a big heap of scarves shirts, hats, jackets, and who knows what else! "Molly, did you even look at the weather report for today?" she asked. I hadn't. I looked at the pile of clothes, and didn't even have to question where they were going. I heard laughing and screaming outside. They were already starting the snowball fight! "Fine. But please hurry!" I told her. Josefina threw some shirts at me, and I whipped them on in record speed! She piled on layer after layer after layer. Hats and scarves whizzed through the air, clothes were flying everywhere! I wondered when it would end! Finally, Josefina topped it all of with a bright red, thick, knit sweater.  Honestly, I was sweating and looked like a giant marshmallow. I could hardly move my arms! But I was glad because I could finally go outside and play! So, I waddled out the door and was immediately greeted by the dolls. A few were laughing at the sight of me. I did look pretty ridiculous! "So are you ready to make snow angels?" asked Kit. Just before I could say yes, I realized something. "Oh no!" I exclaimed. "What's the matter, Molly?" Rebecca asked. "I have to go to the bathroom!!!"