Rain, rain, go away! We want to go to the beach and play! (By Julie) 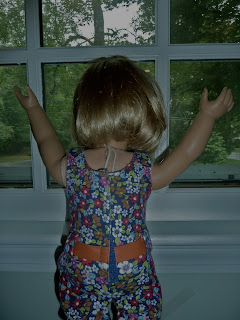 Hi everyone! It's Julie :) Today ended up to be soooo much fun, just not in the way we thought... In the morning, we all sprung out of bed at 6 in the morning, threw on our bathing suits, slathered on sunscreen, and didn't even bother opening the window shades! It was Kit, who slept in late this whole time, while we were preparing for our day at the beach. When Kit woke up 30 minutes later, we were still getting ready. She simply yawned, and looked out the window. Kit yelled, "I don't think we're going to the beach today!" We all gathered around the window, while Felicity checked the forecast for the day. It didn't take a weather forecast to tell us that it was thundering outside, and rain was pelting everywhere. We all moped around, and were very upset. Angela even started crying. But Kirsten had an idea. "Why don't we have an indoor beach party!" At first, the idea seemed unrealistic, and a bit silly. But soon, Carely started assigning cooking jobs and planning out a lunch buffet, Kit, Marisol and Kirsten offered to be on the games committee, while Angela and Samantha offered to put up decorations. Soon, we all became optimistic that we would bring the sunny beach home to us. Molly put on some tropical party music, and we started the silly preparations! 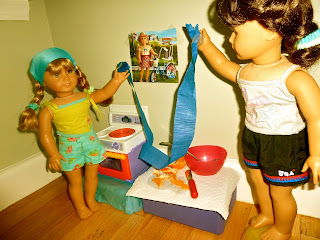 Angela and Samantha went off to find some decorations. We hadn't had a tropical party before, so we had to be creative with our decorations. Rebecca went up into the attic to look for the streamers, and Angela looked in the basement. They were in the attic. But nobody had told Angela that they had already been found, so she kept looking deeper and deeper into the basement. Pretty soon, we heard an EEK!! Angela had tangled herself up in a huge spider's web! We all came running down, to find that it was just an old halloween decoration! Well, she found some decorations alright! After that little excitement, they went on with their festive decorating, still giggling about the fake spiderweb! 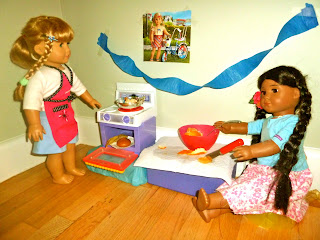 After they were done decorating the kitchen, the cooks: Carely, Kaya, and Kit continued with the food preparations. First, Chrissa recommended her family's tropical pie recipe to Carely, and the two of them cooked the pie. Meanwhile, Kit started working on the punch, then during the decorating break, forgot all about her job! Kaya took over afterwards, making a delicious fruity tutti orangy punch! Besides the punch and pie, the cooks worked on the mashed potatoes, salmon, and a fruit bowl, with a little help from Kirsten! 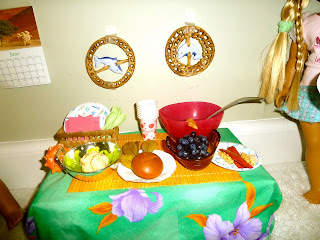 When the food was done, Felicity and I decorated and set up the buffet table. When Carely, Kaya, and Chrissa came out with the food, they had the most amazing table to put it out on! (I really shouldn't brag...) We used a tiki mat over a tropical floral tablecloth, and with the hawaiian music on, it truly felt like a tropical paradise! 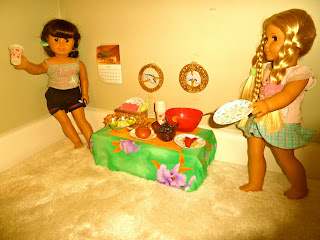 Now, it was time to get our food! It all tasted delicious! We talked about how fun our party has been so far, even to prepare! All the games committee members couldn't help but spill the beans about the big hot potato game coming up at the end of the party! They said we would use a starfish instead of a potato. We all complimented the amazing chefs for such an amazing looking meal, and we began to dig in! 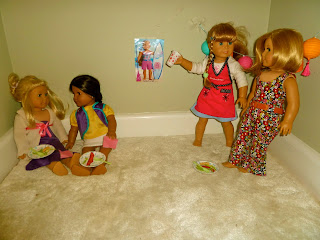 MMMMMMMMMMMMM!!!!!!!!!!! The salmon, the pie, the mashed potatoes, the Orangy Punch, the fruit! We had such a fun time sitting around (or standing) eating a tasty meal, and chatting! 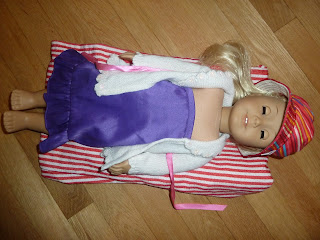 After lunch, we decided that we should have a chance to relax before we started the games. Jessica ran straight for her beach towel! With the ocean sounds CD on, I bet Jessica felt like she was really at the beach! 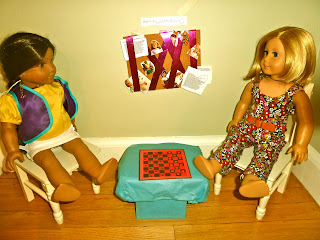 We played limbo, volleyball, and then some individual games were set out. Kirsten and Samantha played chess, Molly, Angela and Kaya played go fish, (Molly was planning on going fishing at the beach anyways!) Felicity, Jessica and Rebecca headed towards Chinese checkers, and Kit and Josefina played a mean game of regular checkers! The rest of us played tag around the sofa! After that was done, and we all had our laughs, we hyped ourselves up for the big game of hot potato! 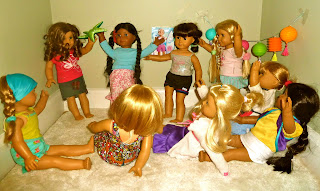 We started hot potato, or as we now call it, "Slimy Starfish!" Molly cranked up the tropical music again and offered to control the music. Pretty soon, we were passing around the toy starfish! The game was really going when lots of us were out, and we played until we had a winner. Drumroll please.....
The winner was Kit! We all congratulated her and all ate a second helping of Chrissa's delicious tropical pie! What a fun day! We learned that even when the weather lets you down, you can still have a ton of fun!
Posted by AG Gossip Doll Blog at 4:37 PM