Working at the Cafe (By Felicity) 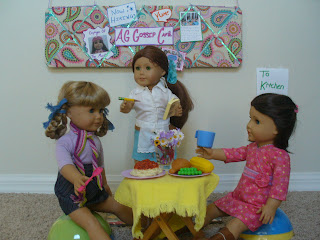 Today was my first day on the job, working as a waitress at the AG Gossip Cafe! I woke up early and arrived at work. Soon, my first customers walked in: Chrissa and Kirsten. Chrissa ordered Chicken Delight with peas, and corn. Kirsten ordered Sloppity Soup Pies.First, I started on Chrissa's order. I went into the huge kitchen and grabbed a plate. I began to fill the plate with a cob of corn and a piece of chicken. Then, I found the large pot of peas. I balanced the plate in one hand and scooped up a big spoonful of peas with the other hand. All of a sudden, I heard Marisol belt a high note in her operatic alphabet. Startled, I turned around and accidentally knocked over the pot! A sea of small, green peas rolled all over the kitchen floor. Just then, Kaya walked into the kitchen and before I could warn her, she slipped on the peas and landed in a squishy, green mess. Kaya helped me clean up all of the peas. I got a spoonful of what was left of the peas and put it on Chrissa's plate. Now I could start on Kirsten's order: Sloppity Soup Pies. Hmm, I had never seen that on the menu before. So I did the best I could. I grabbed two mini pie crusts and sloppily ladled soup into them. They certainly fit their name! I made my way to Chrissa and Kirsten's table and presented the girls with their meals. Kirsten looked very confused. "What's this?" she asked. "It's your Sloppity Soup Pies," I replied. Kirsten burst out laughing. She said "I ordered Spaghetti Surprise!" I felt so stupid! I rushed back to the kitchen and made her a heaping plate of spaghetti with a spoonful of Chef Carely's Special Spaghetti Sauce. I came back and gave Kirsten her meal. Kirsten and Chrissa said that they had a very fun visit to the AG Gossip Cafe. Even though my first day wasn't so great, I am sure I will do better tomorrow!
Posted by AG Gossip Doll Blog at 12:31 PM